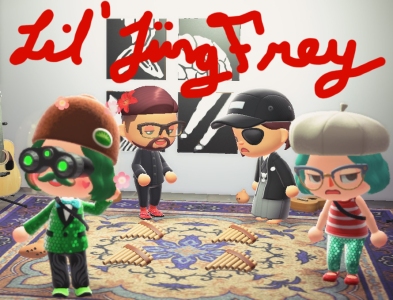 Our new name is The Ensemble Whose Name is Uhhhhhmm… (Spelled with Five H’s and Two M’s).

A message from the artists formerly known as LJF:

Hey everyone! We wanted to address something that you may have seen by now: Jürg Frey has respectfully asked that we stop using his name for our ensemble, and we are letting you all know that we are honoring his request and are in the process of coming up with a new name for our ensemble.

As you may have seen in a previous post, the name of the group came from a typo while we were playing around in the game. Initially, the project was a more or less private affair that we used to keep ourselves entertained while maintaining a collaborative and creative outlet during the early days of the quarantine. We thought the name was playful and cheeky, which matched the tone of the whole world that these performances take place within.

It was also a naive homage to a composer whose work we like a great deal.

We certainly didn’t expect that we would be invited to do more performances by people we didn’t know. While the project is meant to be playful, we do take what we do seriously, and we never meant disrespect to Jürg Frey. We should have reached out to him when it was clear we were bringing the project beyond our immediate group of friends, and we regret not doing so.

We want to thank Jürg for humoring us thus far, but now it’s time for a new name! We’ll announce our new name when we send out the guidelines for our call for scores.

“Really strange, quotidian, domestic, experimental music which is really compelling … it’s almost like various people walking into a room together and rattling the things around them, that’s what it kind of sounds like. But that’s the basis of experimental music isn’t it, in the John Cagean way, so why not do it in Animal Crossing as well?  ” – Fielding Hope of Cafe Oto, London.

“I was watching it with my 11 year old who was just fascinated” – Verity Sharp, BBC3

“…while the game’s cute graphics and the performances’ overall premise may feel gimmicky at first, the meticulous consideration for rhythm, sonic qualities and spirited experimentation are undeniable upon viewing and very much in the lineage of Fluxus … what they accomplish here feels surprising, enthralling and nothing short of singular.” – Joshua Minsoo Kim, The Wire, August 2020, Issue 438, p.84. Read the full article here.

First Performance: Saturday, May 2, 2020, hosted by Lumpen Radio as the official after party for Common Field Convening. Other performances by Stephie’s Castle, Patrick Shiroishi, and Spectralina.