(please note this is not the order of the actual program) 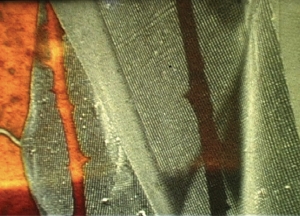 De Luce 1: Vegetare, Janis Lipzin.
DVD from Super-8mm film, 4.5 min, 2009
“In the beginning of time, light drew out matter along with itself into a mass as great as the fabric of the world.” –Robert Grosseteste (1170-1253) from On Light, or the Ingression of Forms.

This work delves deeply into experiments, similar to the filmmaker’s previous work in color photography, expanding the realism of color expression that original film allows. She pushes the boundaries of the medium, extending beyond the Kodak palette of color, by subjecting the film material to novel influences of pigmentation. Unfamiliar color and light sweep into and literally illuminate vegetative subjects. In this way her work alludes to but doesn’t describe color in the natural world—rather it supplies visible evidence of surreptitious conspiracy between the artist, her materials, and photochemical occurrences. This is an artisanal hand-made work shot entirely on super-8mm film and hand-processed by the filmmaker.

“De Luce melds [Lipzin’s] deeply-felt interest in nature and its photochemical processes with her equally profound understanding of the medium of film itself (and film is quintessentially a photo-chemical medium). In drawing out such parallel processes she creates images of great aesthetic beauty but which also give us the feeling of something awry. This is a raw and challenging aesthetic that makes us question what we are seeing (and perhaps taking for granted)-images that seduce us but at the same time harbor a foreboding. It is this tension caused by such conflicts of interest that raises the work above the level of (mere) aesthetics.”
—Guy Sherwin, Film Artist; Senior Lecturer, University of Wolverhampton & Middlesex University, UK.

[De Luce 1] is a gift of luminosity and elegant delicacy. So beautifully SEEN! And like Zen temple bells, the sound pulls one into oneself/into the screen to be more fully seen.
… This is one for the ages! –Joel Singer, Film artist

Janis Crystal Lipzin is a film artist who has been active for more than 30 years in media arts education, curatorial actions, and critical writing. She taught Film at the renowned San Francisco Art Institute from 1978 to 2009 where she served as Chair of the celebrated Film Department. Her many awards include three National Endowment for the Arts Fellowships and purchase awards from the Carnegie Museum of Art, Rene di Rosa Foundation and Kramlich Collection. Her films and photo work has been featured in  numerous museum shows including the Whitney Museum, Museum of Modern Art, Kunstmuseum (Bern), Institute of Contemporary Art (London), Berkeley Art Museum, and the Corcoran. Her  20 independent films and videos are distributed internationally. She has curated media shows in London, New York, Kuala Lumpur, San Francisco, Bologna, Seoul and Busan (Korea). In addition, she founded and directed EYE MUSIC, the pioneering microcinema that produced media events at 80 Langton Street and the Exploratorium in San Francisco and internationally.

Poma Granata, Alexis Bravos.
16mm (on video), 9 min, 2007
Poma granata means “many seeded apple” or pomegranate. I made this piece as a remembrance of four generations of women in my family. It’s loosely constructed around disturbing rites of passage, first experiences of freedom as a young person, and the loss of home. It’s an attempt at regaining memory through finding the perfect food (in this case an apple or a pomegranate). My younger sister stands in for me, embarking on a journey through the city of Chicago, chasing a white rabbit of sorts. She is given a magical hatbox and becomes connected to a woman from the past who eventually leads her to the fruit, which will nourish her.

Crescere is made from a collection of super-8  experiments spanning a 4 year period. The original film was shot using single frame techniques while moving the zoom lens to heighten the sense of acceleration and temporal re-mapping. These fragments were gathered into a video performing software called VDMX to create a rhythmical loops into an integrated music film/video hybrid set to the dream music of TROUM.

Brian Traylor studied super-8 filmmaking with Janis between the years of 2000-2004. He admired her techniques in super-8 film processes, particularly in-camera editing, hand processing and direct film surface manipulation. Brian’s films were shared in class and shown in international and local film screenings. As a person, he has always found warmth and guidance in Janis’s work and practices. He is proud to join Janis is the fight to restore the San Francisco Art Institutes film gnosis. Brian currently lives in Pasadena, CA where he runs a digital imaging company that focuses on small gauge film preservation. 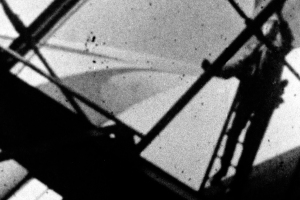 the acrobat, Chris Kennedy.
16mm, 6 min. 2007
Inspired in part by a poem by Toronto poet Ryan Kamstra, “the acrobat” is a consideration of the relationship of gravity and politics—the beauty and necessity of rising up, but also, perhaps, the significance of allowing oneself to fall. If the force of gravity is in relation to both mass and proximity, how does the force of politics resonate across space and time? 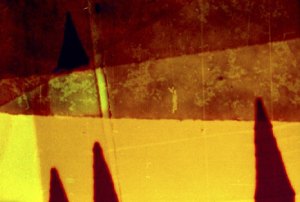 traveling through an invented landscape…the space between here and there.

An abstract film made by applying colour tape directly onto emulsion and exposing it to light. The film presents colour fields in motion, though for the most part the ground is white like a gessoed canvas, and filled with a moving curtain of dust and hair and spots. In order to relieve the regularity (the tyranny?) of the projector’s 24 frame per second pulse, freeze frames are introduced, showing up and isolating a jagged crimson edge, an orange wall with its soft cracks, a yellow corner. After isolating, and setting apart colours in the film’s opening movement, they are brought together in a careening, flickering collage in the film’s second minute. Anticipating and then re-blending the afterimages of these ragged colour fields, the palette slowly darkens as the layers accumulate, canceling out the brilliance of “pure” colours. A visceral, physical cinema making the eyeballs sweat. Hidden colour codes of the synapses firing: a new thought is being born, and a new movie to accompany it. [Mike Hoolboom, 2007]

Originally from Edmonton, Alberta (Canada), Christina holds a B.Sc. in Environmental Biology from the University of Alberta and an MFA from the San Francisco Art Institute.  For the past 10 years, she has worked within Toronto’s vibrant artist-run culture as jury member, arts administrator, technical coordinator, committee member, board member, curator and educator for various organizations including the Liaison of Independent Filmmakers of Toronto, Gallery 44, The Canadian Filmmakers Distribution Centre, The Images Festival, and the Ontario College of Art and Design. Working with film, video and installation, her works explore themes of history and counter-memory, political mythology and environmental catastrophe.  Supported by the Liaison of Independent Filmmakers of Toronto (LIFT), the National Film Board of Canada, the Canada Council for the Arts, The Ontario Arts Council and the Toronto Arts Council, her artworks have exhibited internationally in festivals and galleries including: The Images Festival (Toronto), The London Film Festival (England); The International Film Festival Rotterdam (The Netherlands); YYZ Artists’ Outlet (Toronto); White Box (New York); The Foreman Art Gallery at Bishops University (Sherbrooke, QB); The city of Toronto’s Nuit Blanche 2006 and in the 2006 Whitney Biennial: “Day for Night” (New York).

Christina currently lives in Denver, Colorado and is an Assistant Professor in the Film Studies Department at the University of Colorado, Boulder. 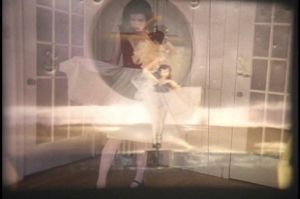 A short travelogue shot over a weekend trip to Massachusetts in October 2007. In this film, I was more interested in exploring rather than explaining my surroundings and journey. Shooting as I wandered through parks, graveyards, and cities, I photographed what caught my eye, without much of any plan before going out. Investigating new ways of using my camera, I tried techniques to fragment images and time, capture light, or create an altered sense of movement. Largely editing in camera, I made few adjustments to the film’s chronology after processing.

Born and raised in Northeastern Ohio, Jeremy Menzies moved to San Francisco in 2005 to attend the San Francisco Art Institute, where he was introduced to West Coast experimental filmmaking. After spending 2007 in New York City, shooting films, curating screenings, and working at the Millennium Film Workshop and Filmmaker’s Cooperative, he returned to San Francisco where he now resides. Currently, he is curating film programs at Oddball Film + Video and working on various photographic and film projects. 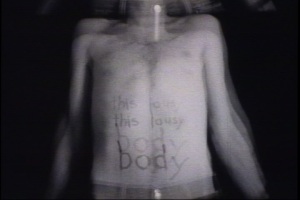 I made this film, in retrospect, as a sort of documentary about the first few days after my father’s death.  It’s part of a trilogy, but this first installment is so intimate and personal that I never screened it publicly.  Now, ten years later, I’ve decided to allow it a breath of light, in hopes it can stand on its own.  It was my first 16mm film, my first sound film, and also a favorite of Janis’. 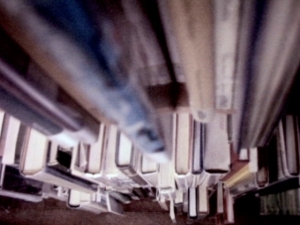 If a book in the library were like a real person, would it secretly crave to be chosen and understood by someone? What has a book been waiting for? And after waiting extensively, would a book possibly have its own freedom?

Kai-Ting Chuang is from Nantou, Taiwan. 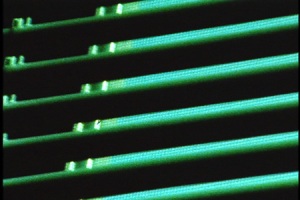 This film is a study of my immediate surroundings, my living space, capturing the images I see on a daily basis. It is built like a collage or a mosaic to amass into a larger perception of a space. Using single frame techniques, images overlap and reside simultaneously in the same space/time. Repetition of images and form create a visual vibratory frequency. KJ

“…in Karen Johannesen’s Light Speed, the image is itself a piece of music, filled with polyrhythms, counterpoint and melody.” Chris Kennedy.

A short improvisation in binary form, based on a series of works by the artist Bill Jenkins, looking at a domestic landscape of the Sonoran desert in full spring bloom.

By working with film as a medium, I have discovered a way to implement my interest in weaving both concepts and materials; integrating different elements into one work. In this piece, I covered the film with cotton and tinted it with dyes. The textures of cotton adhered to the film create a new layer; the original emulsion and the added textures coexist, cover and uncover each other at the same time. The differentials of color tones, the positive and negative footage, and the alternations of abstract and recognizable imagery introduce a dialogue about the possibilities of multiple characters.